Pronounced “You-Clue-let” which means “people of the safe harbor” in the indigenous Nuu-chah-‘nulth language. I personally, found it to be a tongue-twister, I don’t know why. 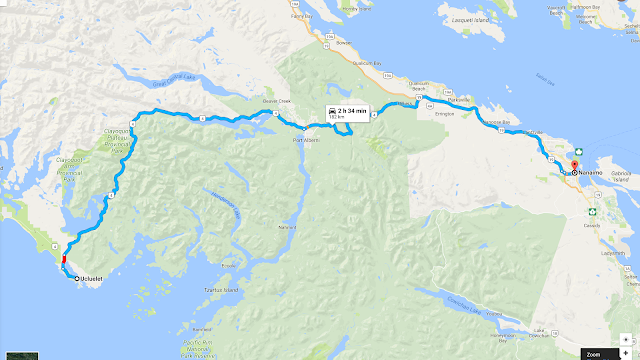 Located on the western side of Vancouver Island, the Ucluelet First Nation People have a strong presence among the 1600 residents here. 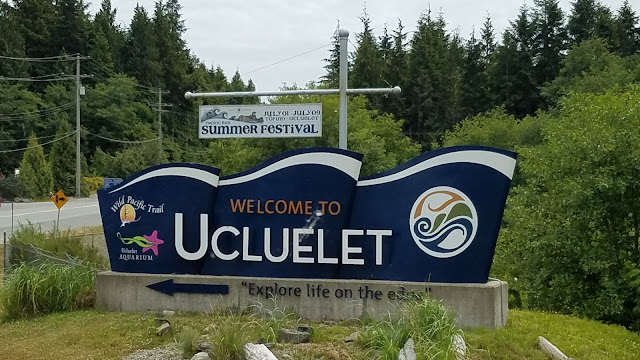 Pacific Rim National Park and its rugged coast was the main draw for us.  The road to get there was not to be taken lightly.


The 110 miles ( 182 km ) took us about 3 hours due to the amount of tight twists and turns, steep grades; at one point we encountered a section of this scenic road which was a whooping 18% grade.  That, for those of you who might not be familiar with road grades, is incredibly steep!  Making it even more hair-raising was the warning that the road was going to be so narrow only one vehicle could make it around the next blind corner! Yikes!


We found our campground despite the directions given and as we drove up the hill to park an employee held the bushes back so they wouldn’t scratch the rig.( They still did ). After setting up, we admired our fabulous view of the harbor below.  Behind the rig was an eagle’s nest where Mom and Dad eagle fed their fledgling many times a day.  I spent more time looking up at our national bird than I did the quaint harbor below.
﻿
﻿

One day we went kayaking with a local tour company in the harbor.  It was a beautiful day, and this early morning tour commonly sees bears on the shore at low tide, but we were not lucky enough to see any.  Not only did we not see any bears, we didn’t see any wildlife at all! Such a disappointment in that aspect.  It was, however, a lovely day to be out on the water.  Plus I wanted to see if my thumb injury hurt ( it didn’t too much ) or Norm’s shoulder would give him a problem ( it didn’t ). So it was worth the time and the money.


Another day we drove to the small town of Tofino to the north where outdoor adventures abound.  Small islands, beautiful bays and beautiful beaches bring serious hikers, fisherman and surfers from all over.


We drove around and toured what we heard were great boutiques, but really didn’t find any shops worth a second glance.  During our cooking class in Victoria at London Chef, fellow student “foodies” were raving about the Tofino restaurant The Wolf in the Fog.  The menu there was very limited, and the cost so outrageous we had a cocktail and appetizer and headed back.

Our last day we hiked part of the Wild Pacific Trail that ran along the local coastline. It reminded us so much of New England’s coast of Maine.

Late in the afternoon we took our neighbor’s strong suggestion of having a cocktail at Blackrock Oceanside Resort.  We were lucky enough to get the last table on the deck overlooking an unbelievably beautiful cove.