Here in the Cave Junction National Park area, the forest fires nearby were becoming more noticeable.  The sky had a eerie hue, almost like a sunset. The air was definitely smelling of smoke from a large, out of control fire only 15 miles away. It was a little nerve wracking not knowing which direction the fire might spread.


We heard about this cool saloon across the street, McGrews, which was also described as a wonderful restaurant, so decided to walk over and check it out. This is not something we typically do, but I was yearning for a little “gaiety”, and it's never too hard to persuade Norm if a beer is involved, and it was, after all 5PM the official "happy hour".


Walking into this very rustic restaurant, we wondered where everyone might be. We checked out the bar to see if that was where people were hiding, and saw only two guys seated at the bar.  Long gray beards, and attire straight out of the 60’s.  Norm and I looked at each other, and simultaneously said “Oh, Boy!” One fella turned and gave us a big, friendly grin, introducing themselves as the Dooby Brothers !  That smile was hard to resist, so we took a seat at the bar next to them, and was both entertained and fascinated by their care-free marijuana-induced aura.

They explained how beer and whiskey chasers only enhanced their outlook on life, as he proudly showed us he collection of electronic e-cigarette devices or “vape” he called it.  Different type of weed for different affects?  Fascinating.  I have always been a “good girl”, and have never been around anyone that smoked pot or did drugs (that I knew of) so talking to these guys was “on the wild side “ for me!


I ordered a simple Cosmo martini, but the bar tender didn’t really know how to make it. “I never had “fancy people” in here before.”  Fancy?  No make-up and old clothes not much better than hiking attire make us “fancy”?  This place is a hoot!


It appeared everyone in this bar were legal marijuana growers.  They hugged, laughed, and shared their “blends” with one another.  Maybe I have been missing out on something great.  I am too afraid to try any mind-altering drugs – I detest even have a booze buzz.  I am trying to preserve the few brain cells I have left!  Norm says he is very allergic to pot.  How does he know that, I wonder……..


Our new friend told us of this miracle salve he makes from organic herbs (most important ingredient is marijuana, of course) and bees wax that has cured his arthritis.  I showed him my still-swollen and sore thumb and he generously gave me some to put on.  Norm tried some on his knee, and thought it made it better, as well.  Later that night, I could have sworn my thumb took a turn for the better!  I was hooked!  Does that make me a junkie?


The menu in this little rustic place in a town of about 500 looked quite good, it’s reputation excellent, and the atmosphere interesting to say the least, so we made reservations for the following night in their outdoor dining area, where we would also have the special treat of listening to a local band playing.


At this point in the trip, I was definitely needing a “spouse-less” day, and to me, one cave is not all that different from another. Add the fact that the temperature was nearing 100 degrees, I quickly declined the Cave tour that would require a hike up a mountain in the heat and smoke.  Norm would never pass one up, and I am sure enjoyed his own “me time”.


I spent the few hours talking with friends and family and doing a few chores. 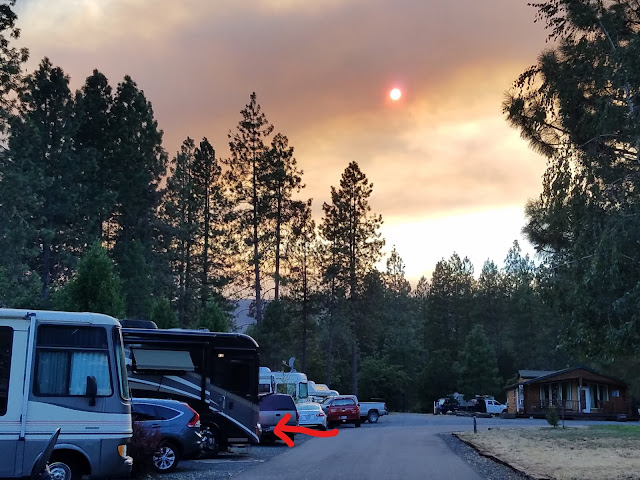 The next night we went back to the bar, dressed even more casually, while nervously looking over our shoulders at the beautiful sunset and the flame-red sky.  It was getting really close, but no one seemed to be more than a little concerned.

Over the next 4 hours we were treated to a shockingly incredible meal that started with a free appetizer of fresh vegetables and homemade dressing, to the delicious main meal.  The waitress was friendly and apologetic for the very slow service.  Norm and I actually were glad that the meal stretched out for hours, allowing time to enjoy the entertainment and of course, a few additional beers and rather good wine. The Dooby Brothers, and then several other people, stopped by our table several times to meet us and chat.


I would be remiss to not say that this band was amazing!  They played a broad range of music from Celtic to classic Rock n Roll!  If they had a CD we would have purchased one, and that says a lot!


We stayed until the band finished, and walked back to the RV a little after 10PM.  What a great little town, filled with very happy people that enjoy a simple life of good friends, small pleasures and a very strong sense of community.