We left Port Angles, Washington to embark on our second phase of the trip.  It mentally feels that we are “on our way home” even though we won’t be back for another couple of months.  71 days to be exact.


Heading west to the small coastal community of LaPush we will stay at Quiluete Oceanside Resort, operated by the Quiluete First Nations Tribe.  We have come to realize the name “Resort” does not necessarily equate with what the mind conjures up.  It might mean luxurious accommodations – hot tubs, pools and fitness centers – or perhaps you might find a campground so rundown that even the bathroom  makes you feel a vaccination is needed upon exiting.

This campground was somewhere in the middle.  The lucky few enjoyed sites on the beach, which was, where I thought our reservation was for.  Located directly on what is called “First Beach” it was all about the beach for the majority here.


Our site was directly below a Tsunami Siren, but luckily that was not heard.  What we did hear, however, was non-stop barking.  Big dog barks, small yippy dog barking, and the frequent sounds of dogfights.  All day, and most the night.

Owners would sit beside their campers drinking, and positively ignore their dog carrying on for hours.  One night, after midnight, I really wanted to go out and see the moon reflect on the ocean. But since the dogs were finally quiet, I hated to rile them all up again.  I am sorry, but it is not fair.  I love dogs, my dad bred them and I tell you, they were trained not to bark.  It can be done.


Late the first afternoon we took a long walk on the beautiful beach all the way to the end. Norm and I are not tremendous beach lovers, but you could not help but take in the sights and sounds of this gorgeous place.


The next morning, about 6:30 the goal was to head to Hoh Rain Forest.  I had packed our breakfasts and lunches plus hiking and camera gear the night before.  As we were about to leave, I couldn’t find my cellphone ( camera ) anywhere!  After searching high and low, I had to assume I dropped it somewhere on the miles of rocky beach the night before!


I tried technology first.  “Find my phone” app told me they could not locate my phone. Well, that makes two of us.  After calling it on Norm’s phone I realized it behaved as if dead.  Oh, no!  Technology, I learned, is only good if there is battery power!


We took off and combed miles of beach for well over an hour.  As time progressed, I became worried that someone picked it up and might have either been accessing my info, or just calling their friends all over the world.


When we got back, Norm took apart the couch to see if it had, indeed, fallen “between the cracks”.  Yeah!  My hero!  There it lay, with its battery dead as a doornail, but looking beautiful nonetheless!


How have we become so dependent on these small, electronic devises?  Jeez!  I knew I could live without it. But I would feel even more out of touch with family than I do already traveling this far, for this long.   The camera in this light, waterproof devise is amazing.  Almost all the photos in my blog are from this silly phone!  Plus it’s so darn easy to carry!


Thanks to me, we had missed the window of opportunity to hike this magnificent temperate rain forest sans crowds, so we decided to wait and try again tomorrow. We will set our clocks, one more day!


Most of the beaches along the coast afford the best viewing, walking and beachcombing during low tide.  Trying to hike the rainforest that was over an hour drive to the east and the same day we wanted to get to the famous Ruby Beach that was about the same distance south, was probably impossible with the current tide schedule.


Since the rain forest was out, we headed south.  Ruby Beach, which I not only read, but was told not to miss, was unbelievably beautiful. Ruby Beach is part of the Olympic National Park and named for the rose-colored ruby fragments found dispersed among the grey sand. We didn’t recognize at ruby fragments, while there, however.

What we did see were huge rock formations looming over the sand and surf while sea creatures at their base flirted with us as we walked along. Although called a “beach” swimming is not only undesirable here, it is not allowed.

We spent several hours poking around the water’s edge watching hundreds of sea anemones devour baby crabs and sea stars (it is no longer politically correct to call them “star fish” ) cling to rocks by the dozens!


The surf appeared to be a mesmerizing pink, but we wondered if that could just be our imagination playing tricks on us in this incredible place.  It must be the ruby fragments.


There was a lot to see, and although I could have spent days here drinking in the sea, surf and sun it was time to move on.
Heading south again, we stopped to witness nature at its weirdest. ( is that a word?).  A little more south, still in Olympic National Park, lies Kalaloch Lodge, where lives a massive tree that has survived decades without soil feeding or supporting its roots.  A freak of nature? Perhaps.  Down on the beach, The Tree of Life aka “Tree Root Cave”, erosion has stripped this tree of all apparent life support, yet it appears to thrive on air alone!


Norm and I took the short beach walk to the tree and took pictures to authenticate its existence.  We ate our lunches a few yards away and watched the shoreline for a glimpse of the whales another couple told us they had just seen.


After watching for about ½ hour, we laid in the warm sand for a quick nap.  Listening to Norm softly snore, I decided to resume my vigil for whales.  I didn’t believe my eyes as I saw a small pod just off shore. Was I dreaming? Did I nod off to sleep?
Not 2 seconds after waking Norm, a huge whale ( I think it was a humpback Norm insists it was an Orca ) rose out of the surf about 100 yards off shore and suspended there - with its massive jaws open for long enough to not only give me time to get my camera, but to take a picture! ( Although not a great one. )


We stayed quite a while after that, catching glimpses of them while hoping for another Kodak moment.  No breaching, but it was fun just waiting and watching.


From there we headed back toward the campground stopping at the Forks Timber Museum.  Back in the 1970’s, Forks was considered the “Logging Capitol of the World”. This museum, presented in a log cabin built by local volunteers and the High School Carpentry Class of 1989, told of the history of homesteading, farming and logging in the Pacific Northwest.


The town of Forks has evidently become famous due to the novel series “Twilight” and the movie of the same name.  There is “Twilight” everything in town. Hotel rooms with a Twilight theme, Twilight menu’s, Twilight gifts and mementos of every variety. Tee shirts, sweat shirts, Subway even has a “Twilight” sandwich!


Norm and I had not read or even heard of the series, so it was lost on us.  Too bad, it could have been fun since we were right there amongst the supernatural.


With nothing much more of interest in the tiny town of Forks, we then headed back to make dinner and watch the thick fog roll in with the surf.  Rather cool.


The next day things went a lot better.  About 6:45 we were out the door heading to another part of the vast Olympic National Park.  Hoh Rainforest, with its 140-160 inches of rainfall each year is considered to be one of the finest examples of a temperate rainforest in the world.  With many beautiful areas in this park, Hoh Rainforest should not be missed. 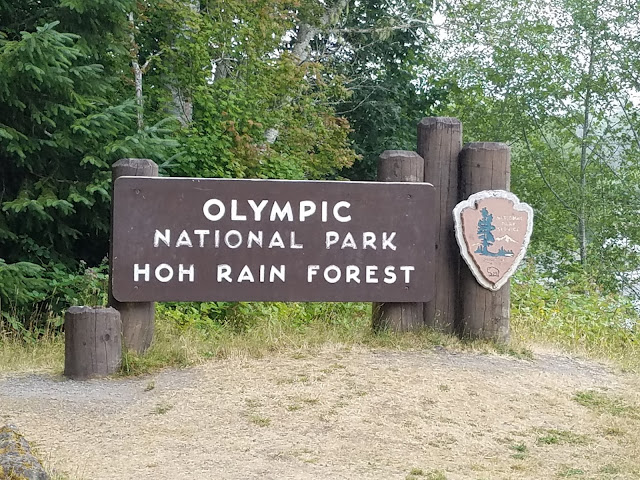 We were shocked to see the parking lots of Beach 2 and 3 full a little before 7AM!  Is good weather so rare for the locals that they want to spend as much time there as possible?  Good grief! ( We later discovered that they were most likely campers there from the night before ).

As soon as we arrived we ate our cereal that we packed, and hiked the trails marveling over the huge trees covered in moss and the tropical ferns on the forest floor.  Spotting a couple of Roosevelt Elk made our early morning trek complete.


Once back in the parking lot we found the crowds had arrived while; we had enjoyed our solitude on the trails.


On the way back to LaPush, we stopped at John’s Beachcomber Museum in Forks where a man displays his treasures that he has collected for the last 40 years from the local beaches.


There was a huge section of the barn that was dedicated to the items found from Japan.  Tsunami debris of every type. Also of interest was the Naval weaponry, and the hundreds of glass balls found.
I found particular interest in the display of “messages in bottles” that he found.  The notes were neatly placed in a notebook for all to read.  Quite a few were from Navymen, and others from children doing a class project.
The Raggedy Ann doll heads were a little creepy, as was the locked cabinet displaying medical waste.  I overheard his wife say that “Finders keepers” is the rule among Beachcombers. John found one man’s left shoe on one beach, and months later a friend found the right shoe on a beach 100 miles away!

We spent over an hour here shaking our head in utter amazement.  Definitely worth the $5.00 charge in order to support this strange fellow.  I feel he is doing everyone a favor by cleaning up the beaches!


We headed back to camp after enjoying a very diverse day.