We headed south about an hour and half drive to stay about mid-point on the eastern side of the island. We were looking forward to Parksville – everyone says they love it here, plus we were staying at a “Resort” with a waterfront site, which should make it
even better. Hopefully, this park will give us a little more room than the last place.


What we quickly discovered upon arriving was that this RV “Resort” was 98% permanent residents.  I mean PERMANENT.  Plain ole mobile homes, but with fantastic sunrooms attached.  Nearly every site had one, so it appears this place on the beach has a lot of year-round residents. People also fixed up there landscaping to different extents.

I don’t particularly like to be the only new-guy in town.  People, we have found, don’t socialize much with us “gypsies”.  Not worth getting to know, I guess.  I like to socialize – get out and gab.  Learn about the area from those who know.  There is a strong camaraderie among fellow nomads that you just don’t get to enjoy when parked amongst the permanent folks. Typically.

The single woman next door to us had a phenomenal perennial garden that would be the envy of every Master Gardner.  Unfortunately, she also had a poodle that she “trained” to bark at every deer that came near, of which there was an abundance.


After listening to this dog for an entire afternoon, and having it wake us up at 2:30 in the morning (we never got back to sleep) I went out and bitched at her. (In a nice way – sort of). Over the next several days the woman kept the “anti-dog bark collar” on her, which helped tremendously.  I sincerely thanked her very much for the great night’s sleep.


One of the main events I was looking forward to here was the International Sandcastle contest, which was at the Community Center right next door to our campground.

The rules of the contest are quite interesting. Each solo contestant gets 10 yards of special “pure” sand ( no shells or rocks ) on at 12’x15’ plot and doubles ( two sculptors working together ) get 15 yards on a 20’x20’ plot. The sculptors can use the sand within the plot and water. Nothing else. All sand must be used in their creations.

To watch a fabulous time lapse video of the construction of one artist's sculpture, click here


They then compress the sand in wooden forms to compact it and remove any air.  The less air, the stronger the sculpture.  After their masterpiece is completed, they spray it with a solution of white wood-glue (environmentally friendly ) and 80 percent water.  This provides a protective barrier that prevents wind, rain, and the sun from blowing away the details. Some artists put wires in the peaks of the artwork to prohibit birds from landing and damaging their work. Properly constructed and overall design could allow a sand sculpture to last for months!


The artists have 30 hours over 4 days to complete their projects.  Winners earn up to $5000, and advance to the World Championships.

Rain was in the forecast so we decided to go see the sandcastles the day we arrived thinking the sculptures would be in better condition.  It was much, much smaller than I imagined, but the talent was mind-blowing.  How someone can take a mountain of sand and create such delicate carvings, I don’t know! A far cry from those “masterpieces” I proudly created with a sand pail in my youth, that’s for sure!


We walked around, studying each entry and cast our vote for our favorite.


During the next few days Norm went on an adventure caving expedition.  My thumb is still bothering me (I hope I didn’t tear a tendon in it) so I didn’t want to risk further injury, or perhaps not be able to hold onto a ladder or rope once I got down there.  I also must admit that I looked forward to a little separation from my dear spouse I have been attached to the hip for the last 100 days (except for one other).  He thoroughly enjoyed the caving experience but unfortunately tore the back of his hiking pants so badly we had to discard them.

I managed to get my hair done at some random hair salon, which was actually in a lovely remodeled basement in a residential neighborhood.  I was initially nervous, but she did a nice job.  I finally felt good about myself, so we went out and had a lovely dinner at Butlers at the Mansion in the nearby town of Qualicum Beach. The cutest couple about our age got engaged that night, and it was fun to watch.


We also took a walk around Milner Gardens, which was a lovely estate set in an old growth forest, but not nearly as awesome as the Grove of the Patriarchs at Mt. Rainier.  Let’s face it, we have gotten spoiled by all the beauty we have been so fortunate to experience.   It was a little exercise which is always a good thing.


There was a huge craft fair going on, but we first stopped at the weekly farmer’s market which was so lovely we thought it was the St.Mark’s fair we were aiming for, but then discovered it was the wrong one. By the time we got to the huge annual fair, (about 10AM) there were thousands of people and no place to park.  There are several of these mega-craft fairs at home, so we didn’t have any desire to endure the crowds.
The Community Center next door had events of all kinds going on, so one night we went over for a live concert by a cute older couple.  Our enjoyment certainly was not due to their real musical talent, but from watching the small children dance around amazingly well to the beat, while dogs interacted at the heels of their owners.  We stayed about an hour and strolled back to the motorhome.

One morning we had our very first restaurant breakfast since we left over three months ago, at a small place sitting right on the runway of an even smaller airport named  Final Approach.  The setting was lovely, and the meal was pretty good.


There also was an International Kite Festival that weekend there, which we mostly observed as we drove by several times.  Our last day in Parksville we walked over and watched the various children’s contests that were going on. 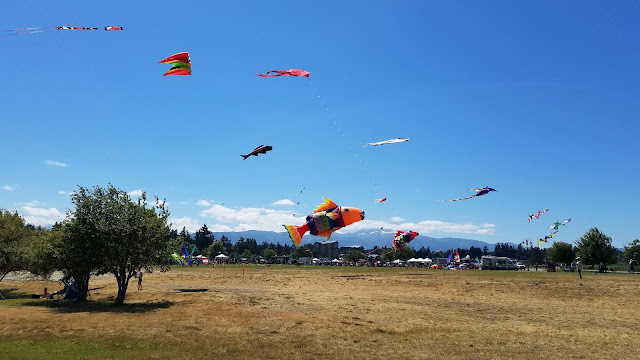 Boy, they make beautiful and amazing kites these days!  Some are strung together like a train; others people didn’t even have to hold!

I don't get the point of that, myself.  That used to be what kite flying was all about – making the kite out of newspaper and balsa wood strips, tying strips of your Dad’s old tee shirt on a string for the tail. You then tested your craft by trying to get it up and keep it there without piercing someone’s skull or poking their eye out! If you were lucky you skillfully landed it before it got caught in a tree or the electric wires that were always in the way. Nothing is the same anymore.


Together with both the sun being so intense and getting a little bored, we walked back, had dinner and prepared to leave the next day which will involve crossing back into the US.  Oh boy, Customs again!