The drive to Netarts Bay further south on the Oregon coast, wasn’t nearly as bad as we thought it might be.  Perhaps it was because we left early.  There were plenty of lookouts and interesting shops we passed, but we are too big for most of them.  Without plenty of advance warning, Norm can’t safely pull over anyway, especially if someone is driving too closely behind him.

As we traveled south and approached the mountains immediately to our left, the fog came rolling in, unfortunately blocking out any view whatsoever of the sea and coast .  We were so disappointed because this section was purported to be the most beautiful 50 miles of the coast! Not all was lost, however, since it still gave it a eerie affect. We later learned that when it is hot inland and the air and water is cold on the coast it creates the fog.  I am surprised that I never knew that having lived on the coast of Massachusetts in the fishing town of Gloucester, where there was frequent fog.


Netarts Bay Garden RV Resort, our next stop, had fabulous customer service.  The staff were extraordinarily friendly and helpful ( they very willingly allowed us to have a couple of packages there, one of which, was a couple of month’s worth of mail.)  At this resort it wasn’t about the beach - but about the water, and what’s underneath. Dungeness crabs by the thousands, and this campground embraces the opportunity for their guests to gorge on these coveted crustaceans.

Many of these sites had little sheds for people to store their crab pots, plus there was a convenient boat launch and even a place for folks to cook their crabs! It was crabbing season, so campers here took their boats out early and got their fill.


A great majority of the other campers have been here for months, and come back each year during crabbing season.  They were all very friendly, courteous, and were happy to advise us on the area.


The few days we were here, the beautiful coastline was playing hide and seek with the fog.  The fog won most of the time.


Tired of driving and seeing nothing, we tried to wait until the fog cleared. We gave up waiting and finally went to hike nearby Cape Lookout State Park to see what we could see.  The park ranger suggested the best hike for the foggy conditions which was the Cape Lookout Trail where on a clear day you can see all the way to Cape Kiwanda!  We had a pretty view, but only of the beach below us.  We had a lovely walk through the woods, trudging once again up pretty steep inclines, which is not my favorite type of hike.


While in Netarts we drove north to Tillamook which is known for its huge cheese industry. We got some groceries and checked out cheese factories.  One, Blue Heron French Cheese Factory, was a small facility that also had tastings of spreads and jellies.  I fell in love with a Huckleberry preserve and the fact that I actually opened my wallet and purchased a jar is a testament to how much I loved it! 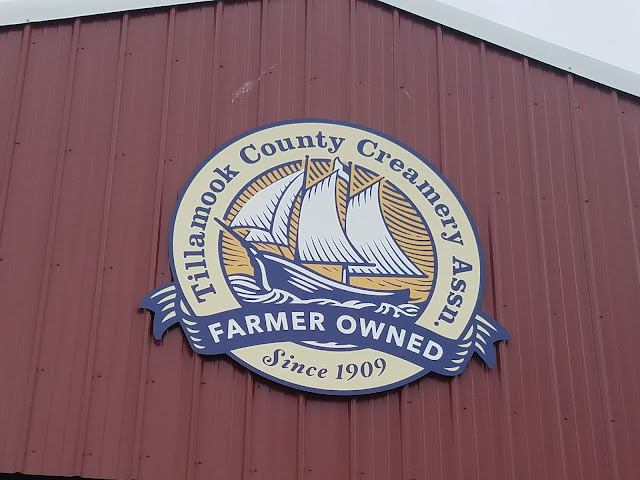 The other is the highly advertised Tillamook Cheese Visitor’s Center, where they had a great mock dairy barn and informational boards describing the modern techniques for raising dairy cows and the production of their dairy products. One placard stated that their baby cows are immediately removed from their mothers so they can monitor what the eat and drink. They are then put in cozy little pens to ensure they don’t hurt themselves.  Come on, now! Really?  It all sounded like their cows must think they are in heaven, but I know better, unfortunately.  Just do some research on CAFO farming. Concentration Animal Feeding Operation.


Norm has had some dairy farm experience as a young boy, and grew bored of the informational section of the Visitor’s Center, but I found it quite interesting.

The big draw to this facility was obviously the tasting room.  Long lines of people awaiting the free samples of cheeses and curds dissuaded us from tastin


I am not sure exactly why we didn’t indulge.  Was it because we could look around at our overweight fellow Americans and see the negative effects of this sweet concoction? Or perhaps the combination of it both being lunchtime and the long line?


They also sold grilled cheese sandwiches positively dripping with cheese, but we went home and made our own (with a lot less cheese) with the same Tillamook Cheese I had previously purchased from Costco.


My thumb that I injured mountain biking July 2nd in Port Angeles was still really hurting. Maybe more and more each day. I was getting nervous that I may need to do more to it than I have been. I purchased a couple different thumb splints but the part most sensitive ( top knuckle upward ) was exposed and more vulnerable wearing the brace than without.  Not wanting to risk permanent damage I decided to go to an Urgent Care facility 10 minutes away.


I got right in to see the Physician’s Assistant that seemed to know what he was doing. (Hopefully) He didn’t think I tore the tendon most often torn by skiers. If I broke it, he said, too much time had passed now to do anything about it.  He offered an X-ray, but could not give me a copy of it before we left, so I passed on that.  He set me up with a better technique to brace it, and off I went feeling more assured.  A few weeks ago I did, however, book an appointment with a really good hand orthopedist that was already scheduling into October in case it wasn’t healed by then.


We were really looking forward to meeting up with two couples that we met in Vancouver Island back in July.  After examining our itinerary, they saw that we would be very close to them when we reached this destination, and invited us to call them when we got here.  We did, and much to our delight, they invited us over for a Crab Boil that they were having, with the crabs that they would catch that morning!

Norm and I had never had Dungeness crab before, but we do love crabmeat, minus the work. But we were more than up to the task!


When we arrived, we felt like we were longtime friends, catching up on all our travels.


They had a couple of large coolers filled to the brim with the 48 crabs they all caught that morning.  They cooked them two different ways, so we could sample them both.  And sample we did, and they were incredible!


The crabs we ate with these new friends will be a memory that won’t soon be forgotten.  The flavors and aroma’s have made themselves home in my mind – making any future crab dishes pale in comparison.  A nice problem to have, actually.


We ate, we laughed, and we drank until it was no longer safe to continue to do so, considering the 25 minute drive back. It was such a great night!


Again waiting out the fog on another morning, we gave up and drove to Cape Meares later in the day, hiking to the light house.  The fog enhanced it’s coastal feel, so we were glad we went. Fog comes and goes without rhyme or reason, so it’s important to get out there anyway and see what you can.